9 Different Types of Witches: Creating Magic All Around You

Witchcraft is one of the oldest trades in the world, with some historians claiming that the practice can be traced back to classical antiquity. This practice involves the use of supernatural skills and abilities to perform magical rituals like the casting of spells.

The people who practice witchcraft are commonly referred to as witches. This article talks about the different types of witches that exist in different parts of the world.

What Does It Mean to Be a Witch?

First of all, it is important to mention that the practice of witchcraft existed long before the emergence of organized religions. Yet, a lot of people understand witchcraft from the perspective of what is often portrayed by the media and how the practice is addressed within their religious and spiritual realms.

Furthermore, there is a lot of fear, interest, allure, and criticism surrounding witchcraft and those who practice it.

Studies have also revealed that witches have many varying beliefs, guiding principles, and rituals. Therefore, it is not possible to have a one-size-fits-all definition of witches. But generally, a witch is anyone (especially a woman) who practices magic rituals. It is also important to mention that witches perform both beneficial and malicious magic rituals.

What Do Witches Do?

According to Professor Norman Gevitz, a famous medical sociologist and historian, medical arts played a pivotal role in spreading controversies about witchcraft in the 17th century, especially in England.

He argues that physicians and surgeons were the main professional go-betweens for defining natural versus supernatural signs and symptoms of diseases. Witches who practice malicious magic rituals are forbidden by law in many parts of the world and are reviled and dreaded by the general population.

But witches who practice beneficial magic rituals are tolerated and even accepted by the people – even though conventional establishments like churches and medicine oppose it. But the important question is: What do witches do? Here are some of their practices. 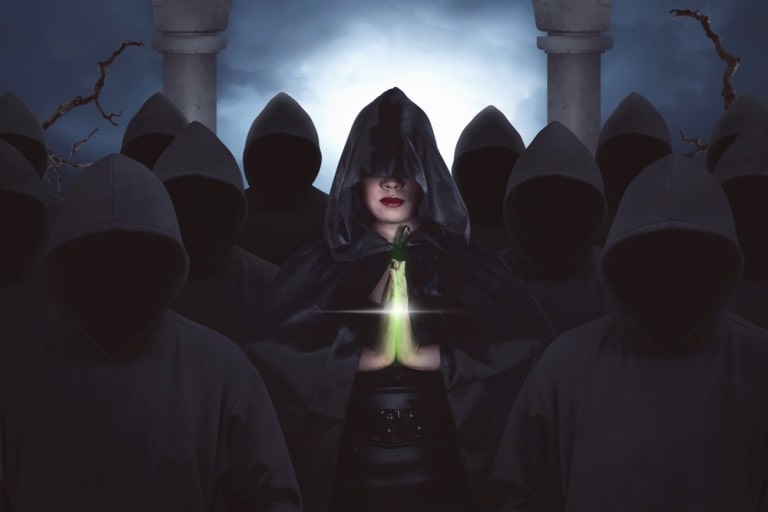 This is probably the most popular practice of witchcraft around the world. The word “spell” represents the medium through which a witch carries out their magical actions. A spell can be a set of words, formula, verse, a ceremonial act, or a mixture of all of them.

Traditionally, spells were cast through various methods, including the writing of characters or sigils on an item to give it magical powers. Some witches could even cast spells by the immolation or binding of wax or clay images of people to attack them magically.

Other traditional ways of casting spells included the recitation of incantations, the performance of physical rituals, employment of magical herbs as amulets or portions, and staring at mirrors, blades, and other specula for divination purposes.

Necromancy is the act of summoning the spirits of the dead for premonition and prophecy. However, this term has also been used to mean raising the dead for other purposes. The biblical Witch of Endor practiced this type of witchcraft (1 Samuel 28), and it is one of the famous witchcraft practices criticized by Ælfric of Eynsham.

8 Signs That Someone Is a Witch

If you are suspecting that someone in your family or neighborhood is a witch, there are several signs you can look to confirm your fears.

Although previously the name witch referred to both men and women who practiced magic rituals, today it is predominantly used to refer to women who practice witchcraft. Therefore, the first thing you have to consider when determining if someone is a witch is her gender.

2. She Owns a Mysterious Pet

When witches sign away their souls, the Devil gives them small spirits to attend to them. This spirit normally comes in the form of a pet that can magically transform itself and go out there to do her bidding. Sometimes a witch will assume the shape of her pet. So, if she has a mysterious pet that does weird things, she could be a real-life witch. 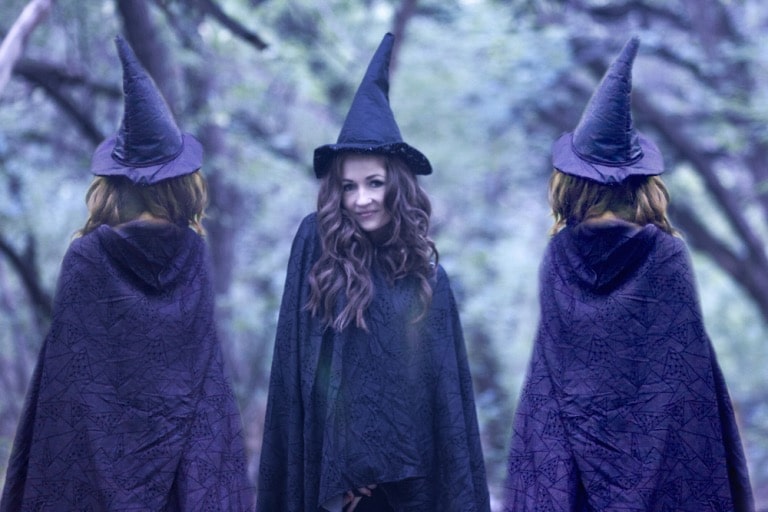 The spirit familiar of a witch feeds on her body, and therefore she has to have a special diabolical teat hidden on her body for that specific purpose. This teat normally comes in the shape of a wart. It could be hidden between her fingers or in a more concealed body part.

A witch will always be coming by asking for all manner of things that don’t make sense to you. For instance, she might be coming by begging for scraps of food and no amount of disapproval will stop her from showing up when you least expect her.

5. She Is Weird Around Your Kids

Consider how she behaves around your kids. Is she paying too much attention to them? Or is she always trying to entice your kids to go live with her by giving them sweets, plums, and other inducements? Sometimes a witch will insist on helping your kids out when they are sick and will come by even when you don’t want her to.

6. She Is Quick to Anger

You should be suspicious if the lady is always quick to anger. If she is known to curse and scream at people for no reason, you should see that as a red flag. Untimely anger is a sure sign of witchery.

7. She Has Stopped Going to Church

If she suddenly stopped going to church or showing interest in religion, that could be a warning sign. Maybe she is attending witches’ Sabbaths and sipping red wine in the rye field behind the church.

8. You’ve Seen Her Spirit in Your House

Have you been seeing her spirit moving around your house at night? As mentioned above, some witches have the power to transform themselves into different creatures and go around terrorizing innocent people. So, if you are completely sure that it’s her spirit visiting your house, then she could be a real witch. 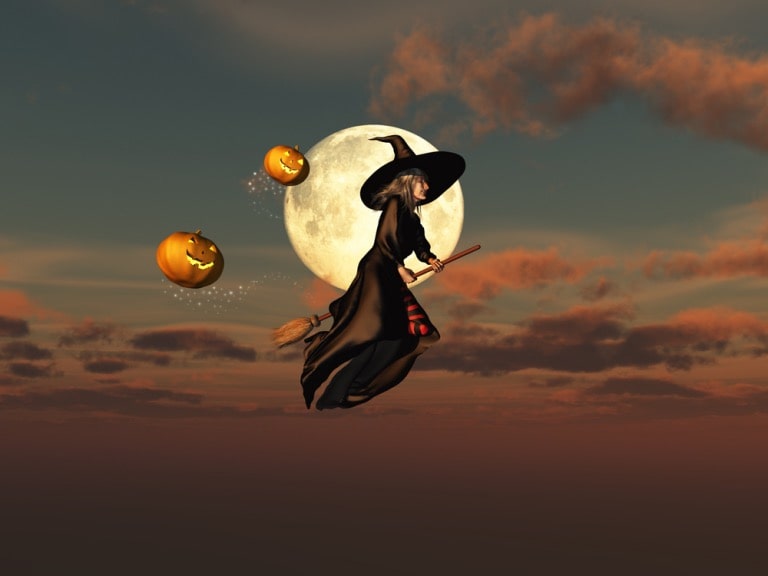 The easiest way to know if your relative, friend, or neighbor is a real witch is to know the different types of witches available. Here are some of the most common types of witches.

A coven-based witch is part of a wider group of witches led by a high priestess. These witches combine their magical powers and abilities to make bigger and stronger spells. Coven witches specialize in ritualistic magic.

Unlike covens, solitary witches work alone and under their own haze. They can follow a single branch of witchcraft or combine several branches.

Crystal witches have a deep connection with the vibration and powers of crystals, rocks, and special stones. They specialize in crystal magic that helps them to manifest, intensify, and attract energy. Anyone who sees auras, feels energies, loves shiny things and enjoys making grids could be a crystal witch.

Cosmic witches are also referred to as stargazers. They specialize in astrology and astronomy and mainly focus on lunar energies of the Moon cycle and spells that amplify and protect against celestial events. Cosmic witches are well-versed with star signs and birth charts.

Green witches are magical workers who care about nature, nurturing, and healing. They get their powers and tools from the earth. These witches also use plants, flowers, and herbs as their primary sources of spell ingredients and content to perform magic rituals. They respect nature more than anything else.

Hedge witches are almost similar to green witches. Their only difference is that they do not pay a lot of attention to nature. They work alone and do not subscribe to any doctrine. These witches also develop their own magic, mainly focusing on creating healing remedies.

Gray witches are known to overlap the gap between white and black magic. They do this using different powers and tools that suit each situation. Their main focus is to seek justice for wrongdoings by redirecting the bad energies to where they belong.

Eclectic witches tend to choose which practices, beliefs, rituals, and ideas that feel normal and upright to them. Many baby witches start out as eclectic witches.

Baby witches are simply novice witches. They start their practice following a certain dogma, based on what their teachers teach them, and then experiment with other doctrines as time goes by.

How Much Are Pearls Worth? Understand Their Real Value

Strongest Zodiac Signs: Find Out If Yours Is One of Them

How to High Five on Peloton? A Simple...

How to Wash Lululemon Leggings – A Quick...

What Are Whippet Drugs? 8 Facts You Need...

Everything You Must Know: 10 Different Types Of...