Which Finger Is for Engagement Ring? Significance & FAQ

Weddings are a time of excitement and getting lost in the gush of romance. But do you know which finger is for engagement ring? There are so many things to do when you’re preparing for a wedding so it’s easy to forget about which finger the ring is supposed to go on.

The ring finger carries a lot of significance and meaning. It’s the most important part of the wedding ceremony. Read on to learn more about engagement rings so you don’t find yourself unprepared at the crucial moment of the proposal or exchanging wedding bands.

Which Hand Does the Engagement Ring Go on and why?

Which Finger Is for Engagement Ring and Why?

Western countries follow the tradition of wearing engagement rings on the fourth finger of their left hand. As mentioned earlier, it’s a practice that has its origins in ancient Roman culture. They believed that there was a vein in the fourth finger of your left hand known as the “Vena Amoris” or “Vein of Love.” And this vein was believed to connect directly to the heart.

In Eastern countries, engagement rings are not a part of tradition but have become more popular today. In India, for example, the groom typically wears the engagement ring on the fourth finger of his left hand and the bride wears it on the same finger but on her left hand.

In Brazil and Columbia, couples first wear engagement rings in their right hands and then move the rings to their left hands after their vows.

Does The Vena Amoris Vein Flow Directly to The Heart? 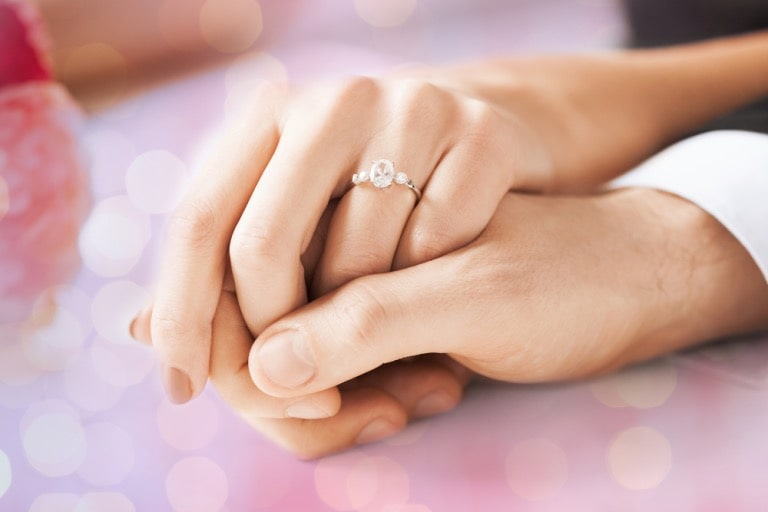 Ancient Roman tradition has established the belief that the Vena Amoris exists, and it’s a vein that runs from the fourth finger directly to the heart. It’s speculated that this may have been the result of influence from ancient Egypt, which was arguably the most medically advanced culture of the time. There was no reason not to believe them.

Sadly, however, the Vena Amoris does not exist. The vasculature of all of your fingers is pretty much the same. The vein of love is a fiction that’s been used to celebrate love with symbolism for centuries.

Can You Wear an Engagement Ring on Your Right Hand?

Yes, you absolutely can. Not everyone’s a stickler for tradition. However, do note that since it’s tradition to wear your engagement ring on the left hand, wearing it on the right may not denote that you’re engaged. It may just seem like a ring you’re wearing for fashion. If you’re in Asia or Eastern Europe, that’s just normal.

Can You Wear Your Wedding Ring and Engagement Ring on Different Hands?

It’s tradition to wear both your wedding ring as well as your engagement ring on the fourth finger of your left hand, also referred to as the “ring finger” for obvious reasons.

But this isn’t a strict rule you have to follow. Wearing two rings on the same finger can get really uncomfortable, not to mention that’s two items of high value you have to look after at all times. A lot of couples ditch the rings after their honeymoon phase or mutually agree to wear just one of the two rings and keep the other one somewhere safe.

Can You Wear Rings on Your Ring Finger If You’re Not Engaged or Married?

There’s nothing stopping you from wearing a ring on your “ring finger.” But it will give off the impression that you are married or about to be. If you’re single and on the prowl for a date or a hoke-up, a ring on that finger could end up deterring a lot of potentials. Especially for men.

Hardcover Vs. Paperback: Which One Is a Better Choice?

Sores on the Roof of Your Mouth? 4 Common Causes

From Traditional to Modern: The Best Ideas for...