For thousands of years, the traditional art form, known as batik, has been used to create amazing images on fabric. Over the years, it’s taken on a new, contemporary look to become the modern batik art craft we know today.

So, what is batik, and how is it done? Everything you need to know is right here!

What Is Modern Batik?

Batik art is a method that applies wax to fabric. It uses water-soluble dyes to create highly detailed and elaborate images.

The best part about this revolutionary art technique is the extraordinary and brilliant-colored results. The tones and textures are unpredictable yet breathtaking at the same time.

One of the best things about batik art is that it caters to all levels of artists, from the beginner to the advanced. It can be as basic or complex as you want it to be.

The themes are also highly personalized. They range from the abstract to the realistic and illustrative.

Whatever the idea behind it or the level of complexity, the biggest benefit of batik is to let the medium do the work. The dyes and wax work have a special sense of versatility.

When brought together in this way, they’re left to gradually reveal themselves on the cotton fabric. They’re capable of resulting in some of the most vivid and stunning works of art you’ll ever see.

The artist draws lines or dots with wax. They use a spouted tool called ‘canting,’ or a copper stamper known as a ‘cap.’

Then, they apply different colored dyes. Since the wax resists the dyes, the artist can create designs by soaking the cloth in whatever color they choose. Then, they wash the fabric with boiling water to remove the wax, leaving behind one-of-a-kind designs and patterns.

If multiple colors are needed, the artist repeats this same process until they get the desired effect.

Tracing Back the History of Modern Batik

Experts are confident that the origins of batik art can be taken back thousands of years ago. Many, however, can’t agree on the exact place.

The consensus is that batik began in the Middle East, particularly Egypt. Furthermore, batik samples were also found in other countries, such as India, Japan, and China. There were even batik art samples discovered in areas around the West Africa region.

In all these countries, people relied on the basic technique of dye resistance. It was their primary form of textile decoration, and it was the main method used for centuries.

Fast-forward up to the 1960s on the Indonesian island of Java. There, artists started transforming batik from a relatively simple, straightforward technique to something far more intricate and complex.

You can distinguish between different patterns and colors based on the region where they first formed. In Java, for example, inland batik is known for its earthy tones on a white background. It’s referred to as ‘batik pedalaman.’

On the other hand, coastal batik made in the coastal regions of Java is called ‘batik pesisir,’ known for its bright, vivid color patterns.

One of Africa’s southeastern countries, Uganda, has always been a hotbed of respected artists and craftspeople. Although, during the country’s president, Idi Amin Dada, reign in the 1970s, these intellectuals decided to flee their home country.

They went in search of somewhere more stable and free of conflicts. Their two top choices were Kenya and Nairobi, where they could live and create their batik works of art in peace.

Once everything had settled down, batik quickly became their main source of living. They created panoramic images of Africa and sold them to tourists, who were only too eager to buy these attractive souvenirs to remind them of their trip to the dark continent. 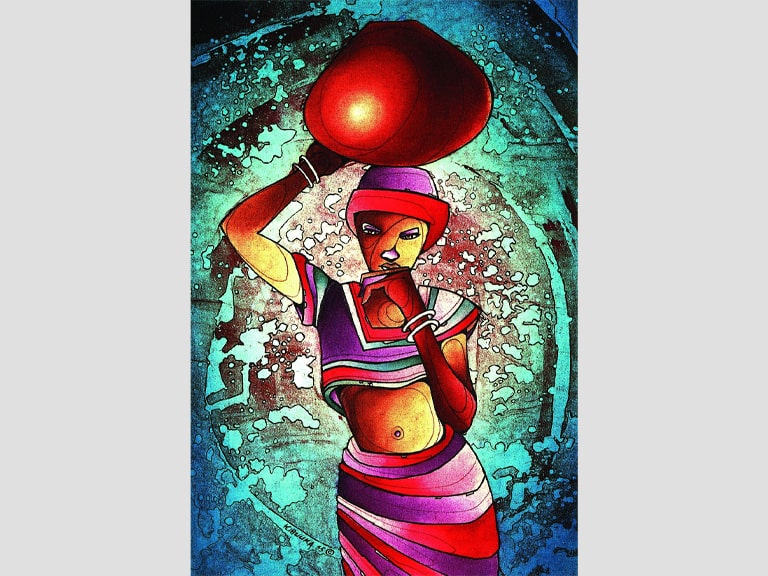 Modern batik was now a renowned style of art that went through dramatic transformations worldwide. Yet, it was in Kenya during the 1990s when a talented artist, David Kibuuka, and his brother, Henry, started developing new methods to batik painting.

They experimented with various tricks, like using paintbrushes. Another technique is to increase their control over the dyes’ dilution rate.

Not only that, but they also reversed the order of the colors. So, instead of starting with the lighter shades as was the norm, they applied the darker tones first.

These breakthrough methods allowed for refined images that seemed alive with details and bright colors. As a result, batik became a highly respected and sought-out art form that enhances shading, depth, and tonality.

First introduced by David, this method aims at increasing the broadness of the textures and tones used in batik. In addition, it enhances the artwork by allowing for a richer, more vibrant palette of colors.

Here are just a few ways that modern batik relates to everyday life.

In late 2009, UNESCO commissioned Indonesian batik art as a Masterpiece of Oral and Intangible Heritage of Humanity. It’s an official recognition of batik as a part of Indonesia’s cultural heritage.

For this reason, the country’s officials proclaimed October 2nd to be ‘Batik Day.’ On this day,  both locals and foreigners are encouraged to wear batik clothing to signify national pride and belonging.

The truntum batik pattern is a symbol of devotion. It’s usually worn at Javanesse wedding ceremonies by the couple’s parents.

Sekar Jagad is another intricate and beautiful motif. This one is usually reserved by the bride and groom. It can also be given as a gift that conveys the message of eternal love and joy.

Many batik patterns find their inspiration in nature. One terrific example is the kawung pattern based on the highly popular kawung palm tree. Wearing it represents positive energy and the importance of being conscious and useful to nature.

Another popular pattern is the tampal, which means ‘to fix’ in Javanese. It’s believed to heal whoever wears it both physically and spiritually.

Modern batik has become a symbol of allure, grace, and beautiful patterns. It’s been used for centuries as high-quality, handmade clothing.

The best part is that it’s made its way into everyday life. From aristocrats who wear it to special events to business people who wear it to work, batik patterns are as endless and variegated as they’ve ever been!

Cannabis Marketing – How Content Marketing Can Help Your Business

How to Tell If Your Car Is Bugged In 3 Ways

Cel-shading in Art and How to Use It

Types of Lines in Art, Their Meaning, and...

Pose Reference: Bring Energy and Life to Your...